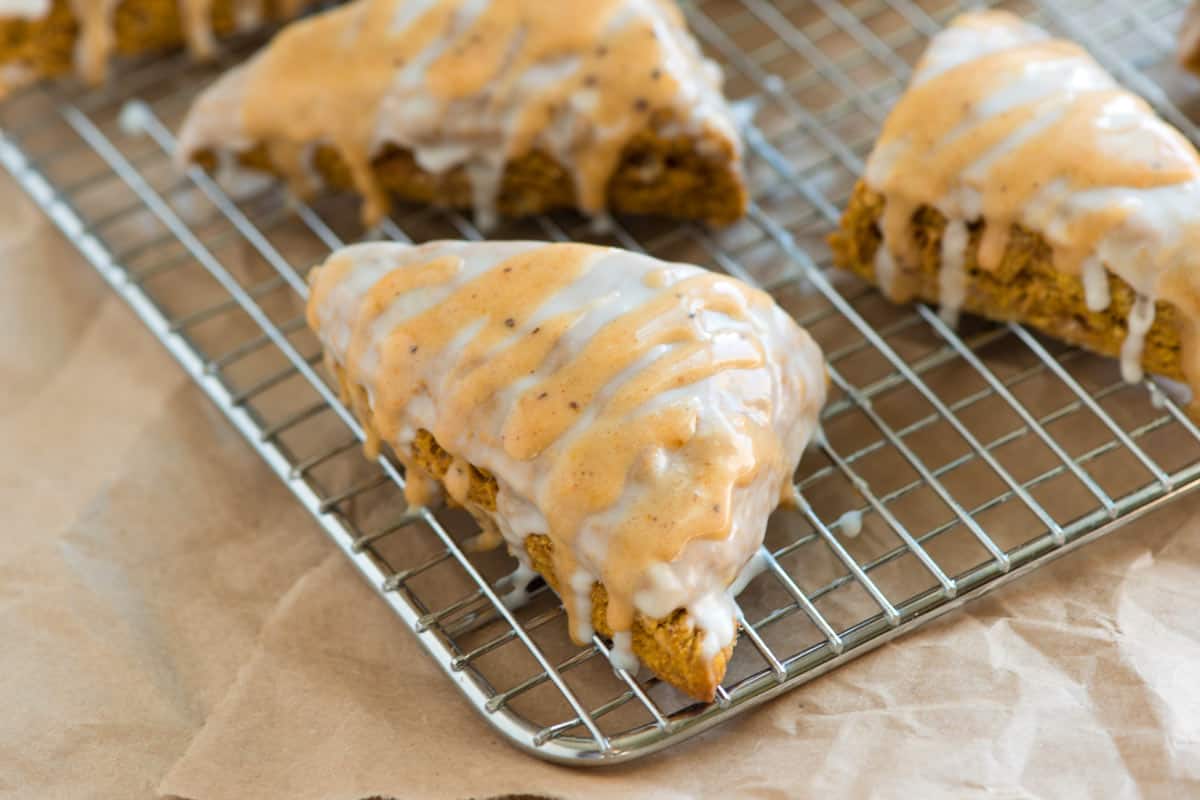 The inspiration for this pumpkin scones recipe was a popular treat from Starbucks! I know it looks like a lot of ingredients, but trust us, the recipe is easy to make. There are two glazes shared below. The scones are delicious with both, but you could use one or leave the scones plain. We’ve had them all three ways and loved them all.

3 tablespoons half and half or cream

1 to 2 tablespoons half and half or cream

1 to 2 tablespoons half and half or cream

Center a rack in the middle of the oven and heat oven to 400ºF. Line a baking sheet with parchment paper. Or use non-stick cooking spray.

Cut the butter into small cubes then scatter over the flour mixture. Use two knives or a pastry cutter to “cut” the butter into the flour until the mixture resembles coarse cornmeal with a few pea-sized bits of butter, about 5 minutes. (You could also use a food processor for this – if using, add flour mixture to the bowl of a food processor, add the cold butter cubes. Then pulse three to four times until the mixture looks like coarse cornmeal or crumbs).

In a separate bowl, whisk the pumpkin puree, molasses, half and half, egg and vanilla extract until blended.

Stir the pumpkin mixture into the flour and butter mixture until a soft dough forms. Transfer the dough to a floured surface. Knead three to four times until it comes together.

Pat the dough into a 10-inch by 7-inch rectangle (a rolling pin can be used here). Cut the rectangle in half lengthwise then cut into 4 even pieces crosswise, making eight rectangles. Cut each rectangle into two triangles, making 16 scones.

Transfer scones to the baking sheet then bake 10 to 15 minutes or until golden brown and a toothpick inserted into the middle comes out clean. Transfer to a wire rack and cool completely.

For the simple sugar glaze, add the sugar to a medium bowl then add one tablespoon of half and half. Stir then judge the consistency. If when you pick a spoon up and out of the glaze it slowly drizzles back into the glaze, it is fine. If it is too thick, add a little more half and half (a little goes a long way, here). If it is too thin, add a little more powdered sugar.

In another bowl, make the pumpkin spice glaze. Combine the sugar, pumpkin puree, spices then add one tablespoon of half and half. Stir and check consistency. Adjust the same way as you would the simple glaze.

Dip each cooled scone directly into the simple sugar glaze then place glazed side up back onto the cooling rack.

Use a spoon to drizzle a zigzag pattern of the pumpkin spice glaze across each scone. Wait 15 minutes or until the glaze has set then enjoy!

Store baked and glazed scones covered with plastic wrap. We recommend storing in the refrigerator if storing them for more than a day. They will lose a little moisture, but will still taste great.