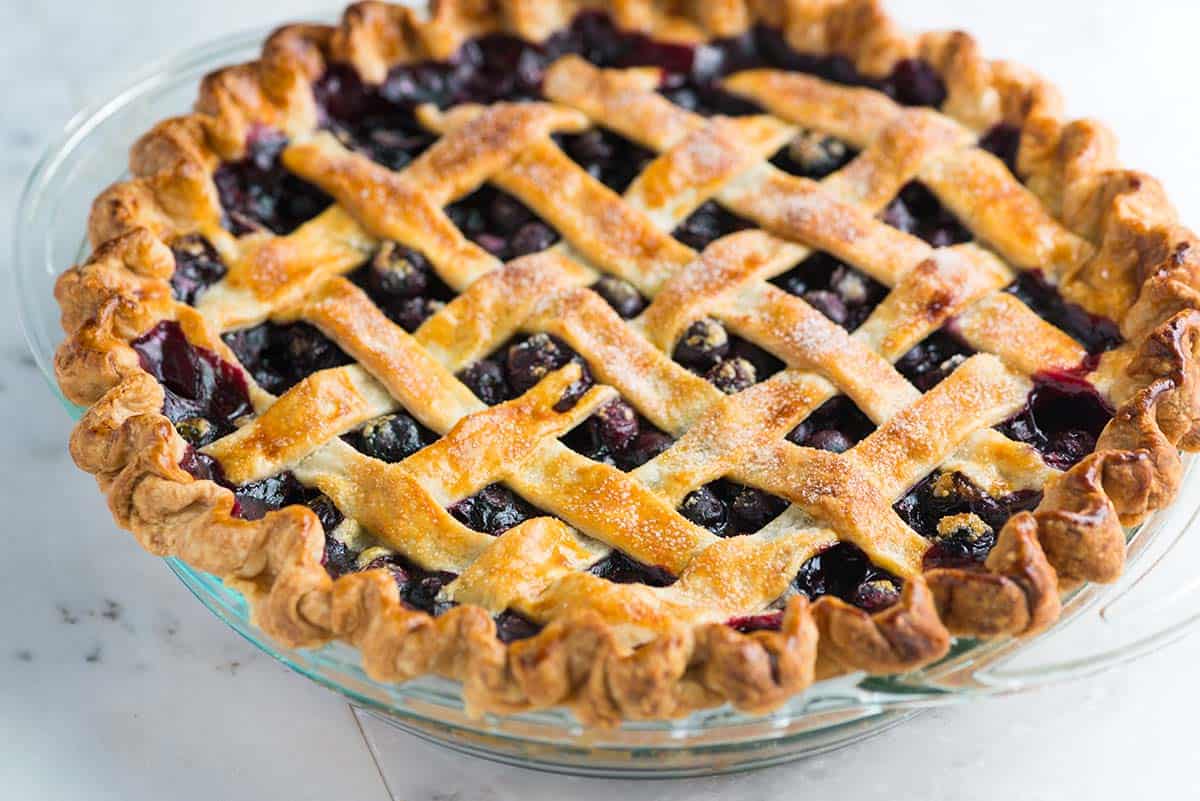 Blueberries shine in this homemade blueberry pie. Use fresh or frozen berries; see our tips below for using frozen. We love adding a lattice crust to this pie, and have shared step-by-step instructions for adding it in the recipe below. You might also find our recipe video (above) useful. If you prefer to skip the lattice crust, you can top the pie with a full sheet of pastry instead. Be sure to cut a few slits to allow steam to escape before baking.

Finally, we love using our all-butter flaky pie crust recipe. We highly recommend it, but you can always use your favorite pastry recipe or store-bought pie crust.

Roll out half of the pie dough to fit an 8-inch or 9-inch pie dish. Sprinkle flour on the work surface and your rolling pin to prevent the dough from sticking. For a uniform thickness, roll from the center outwards and keep lifting and turning the dough a quarter turn as you roll it out. Watch our video to see this in action.

Check for the correct size by inverting the pie dish over the dough. The dough should be about 2 inches larger than the dish.

Place the dough into the pie dish when you have reached the correct diameter. As you move the dough, be careful not to stretch the dough.

Trim the dough to within ¾-inch of the dish edge. Refrigerate while you make the pie filling.

In a large bowl, stir together the sugar, cornstarch, lemon peel, allspice, cinnamon, and salt.

Add the blueberries and gently toss to combine.

Transfer the blueberry filling to the prepared pie crust, and then place the pie back into the refrigerator while you prepare the lattice crust.

Roll out the second half of the dough to a similar size as before and slice it into ¾-inch wide strips.

Lay five strips over the filled pie, parallel and equally spaced from one another.

Trim any overhanging dough strips to ¾-inch of the edge of the dish. Fold the edge of each strip and bottom dough underneath itself, creating a thicker border that rests on the lip of the pie dish. Crimp edges.

Dot the butter over the open areas of the lattice.

Make an egg wash by whisking egg yolk and cream together, then brush it over the crust. Sprinkle a tablespoon of coarse sugar on top, and then refrigerate the pie for 10 minutes before baking.

Position an oven rack in the lower third of the oven, then place a baking sheet on the oven rack to catch any drips from the pie as it bakes

Bake the pie set on top of the hot baking sheet for 20 minutes, reduce the heat to 350° Fahrenheit, then continue to bake for 35 to 45 minutes, or until the crust is golden and juices in the filling are bubbling eagerly.

If the crust begins to over brown, cover the edges of the pie with aluminum foil and continue to bake until done.

Cool the pie for two to three hours before cutting to allow the filling to set.