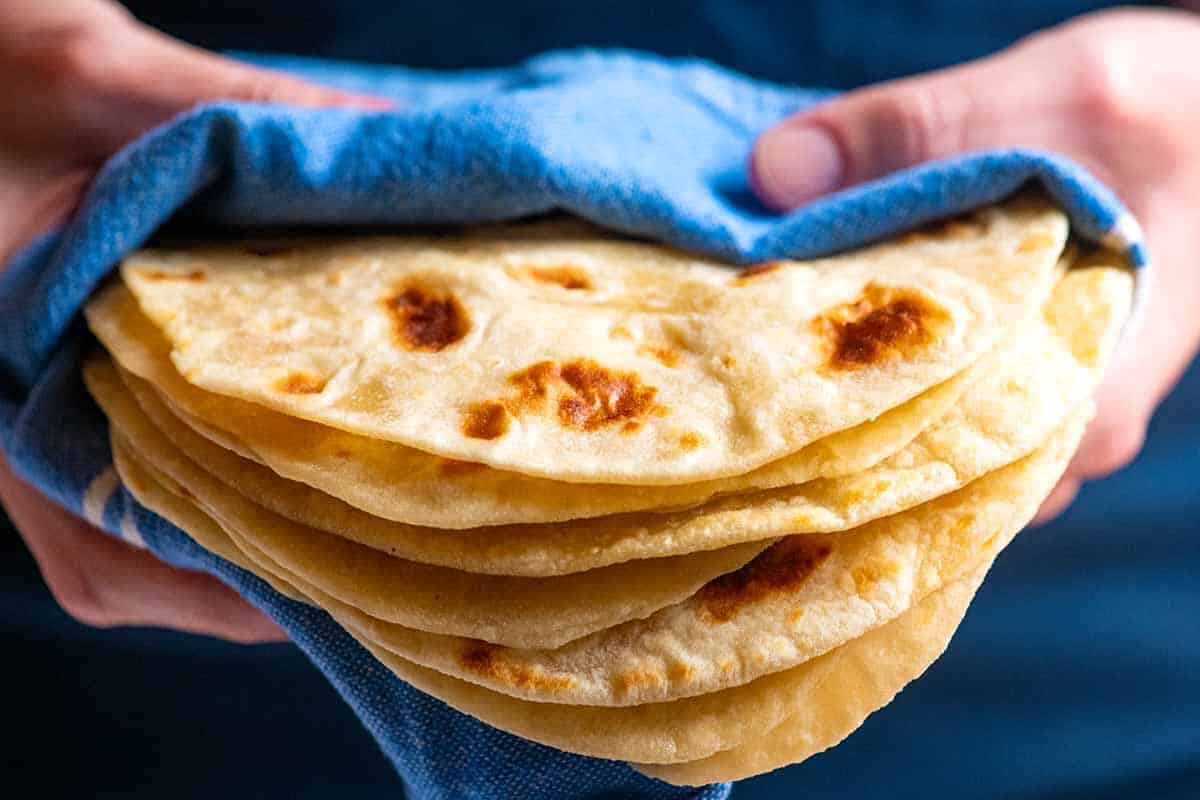 How we make flour tortillas that are soft, pliable and perfect for folding or wrapping. We incorporate a few tricks in the recipe for the best results. Dissolving the salt into the warm water helps season the dough. I especially recommend doing this if you are using a coarser salt. Rolling the tortillas very thin and getting the heat of your pan right makes sure that bubbles start to form (our video shows just how large these bubbles can be). It’s these bubbles that create the perfect texture.

Add the salt to the warm water and stir together until the salt has dissolved.

In a large bowl, use a fork to combine the flour with the oil (or other fat) until it looks crumbly. Pour in almost all of the salty water and stir until a shaggy dough forms. If the mixture seems dry, add a bit more of the water.

When the dough comes together, transfer to a floured work surface and knead until smooth, two to three minutes. Cover with a clean dish cloth and leave for at least 15 minutes and up to an hour or two. Resting the dough makes rolling it out easier.

Divide the dough into ten equally sized blobs and then shape into small disks. Use a rolling pin to roll each small disc into 8-inch rounds or use a tortilla press. The thinner the better, here. If you happen to get 9-inch tortillas, don’t worry! We also don’t worry too much about making them perfectly round. (See our video to watch us do it.)

Stack the rolled tortillas with a piece of parchment paper between them. Alternatively, you can roll and cook the tortillas at the same time. Roll one tortilla out, then while it cooks, roll the next tortilla out.

Make ahead: Divide the dough into smaller balls (this recipe makes ten 8-inch tortillas), wrap them very well, and then place into the refrigerator up to three days. About thirty to forty minutes before you are ready to cook the tortillas, take the balls out of the refrigerator and let them come to room temperature before rolling them out.

Heat a wide, heavy-bottomed skillet over medium-high heat. When it’s hot, add the first tortilla. Within 20 to 30 seconds, you should start to see it puffing up with bubbles forming.

When the bottom of the tortilla has some brown spots, flip it and cook until the second side is browned in spots and the tortilla looks dry around the edges. Each tortilla will take 1 to 2 minutes to cook. If this is taking a long time, increase the heat. If the pan starts to smoke or brown the tortillas too quickly, turn the heat down a bit.

Transfer the cooked tortilla to a dish towel and cover it then continue with the remaining tortillas, adjusting the heat as needed.

Store leftover tortillas in a resealable plastic bag for a day or two or freeze if needing to store longer. Fresh homemade flour tortillas are in their softest state when warm so if you have room temperature or cold tortillas, we recommend reheating them in a skillet until they are warm and pliable again.