How to Make Aquafaba (Ultimate Guide)

Aquafaba is the starchy liquid that beans — especially chickpeas — have been cooked in. It is also the liquid in a can of beans. See how to make aquafaba, how to store it and how to use it. Jump to the Aquafaba Recipe or read on to see all of our tips for using it.

When you cook beans or when cooked beans sit in liquid in a can, that liquid becomes very starchy. It’s this starchiness that makes aquafaba so interesting.

Is aquafaba only from chickpeas?

Technically, aquafaba is made when cooking other legumes. Chickpeas, however, have a tendency to create the best, most starchy liquid. That’s why it’s chickpea water that’s the most common when utilizing aquafaba in other recipes.

What can you do with aquafaba?

It was only in 2015 that Goose Wohlt, a software engineer looking for ways to make egg-free meringues, discovered the magic of bean water (source). We already know that it works as a thickener, stabilizer, binder and emulsifier, but it’s safe to say that uses for aquafaba are still being discovered. Here are the most common uses that we know of. If you know of more ways to use it, leave it in the comments!

Another egg replacer: We also love flax eggs when replacing eggs in recipes.

How do you make aquafaba?

Draining and saving the liquid from a can of chickpeas is the simplest (and most foolproof) way to get aquafaba. Choose canned beans with low or no salt added so that the liquid is not overly salty. It’s also a good idea to shake the beans around the can a few times before opening it and draining. This extra step helps to add a little more starch to the liquid since the beans have bashed into one another inside the can.

You can also make aquafaba from scratch by soaking and then cooking your own dried chickpeas. This method is a little trickier since after your beans are cooked, you will need to simmer the cooking liquid down to the right consistency to match the results you get when using the canned liquid. After cooking the beans, remove them, and then simmer the cooking liquid until it reduces and has the consistency of the liquid that comes from a can. This consistency is also pretty close to what egg whites look like.

As I mentioned above, aquafaba from a can really is the most foolproof option, especially if you plan to whip it. If, however, you cook a lot of chickpeas at home and were wondering how to use that liquid left in the pot, here’s how:

When making this from scratch, be careful not to introduce any oil or fats into the liquid. These can cause problems if you plan to whip the liquid later on.

How do you substitute eggs for aquafaba?

As you can see from the list above, there are lots of uses for aquafaba, but one of my favorites is as an egg replacer in pancakes and baked goods like muffins. It mimics many of the characteristics of eggs in baking. In fact, we use it to make these wonderful vegan blueberry muffins. Here’s a general rule when replacing eggs with aquafaba:

How do you use it?

Aquafaba can be used as an egg replacer in three ways:

How do you whip aquafaba?

The most foolproof method we’ve found for whipped aquafaba is to use a stand mixer and a small amount of cream of tartar. You can whip it using a hand mixer or even a food processor (as shown in our photos), but if you have one, the stand mixer with its large whisk attachment is best.

Is cream of tartar required to whip aquafaba?

It can take a while for aquafaba to whip so please do not let that discourage you. If yours isn’t whipping as quickly as you’d hoped, just keep with it. Some people have noted that it took them 10 minutes of whipping! We usually see soft peaks within 4 or 5 minutes, but if that’s not true for you, keep going, it will eventually get there.

How long can you keep aquafaba?

Store unwhipped aquafaba in an airtight container in the fridge for up to 5 days. Freeze aquafaba for months. For ease, consider freezing it in tablespoons in an ice cube tray. When it’s completely frozen, pop the frozen aquafaba out from the tray, and then place into a resealable freezer-safe bag or container and freeze for months. When you are ready to use it, thaw the number of tablespoon cubes you need in the fridge, and then use in your recipes.

How to Make Aquafaba (Ultimate Guide)

Aquafaba is the starchy liquid that beans — especially chickpeas — have been cooked in. It is also the liquid in a can of beans. It can be used many ways. We use it most often as an egg replacer.

Aquafaba can be used as an egg replacer in three ways: (1) lightly whisked as a binder in cookies, pancakes and muffins, (2) whipped into soft peaks and folded into batters that benefit from added airiness like waffles, muffins and cupcakes, and (3) whipped into stiff peaks and used to make meringue, ice cream or vegan macarons.

Vigorously shake the unopened can of chickpeas, and then open and drain the beans, reserving the liquid. If there are lots of little bits of beans in the liquid, pour it through a fine mesh strainer to remove them.

Choose how you would like to add the aquafaba to your recipe: lightly whisked or whipped.

For lightly whisked, add the measured out liquid to a wide bowl and beat by hand with a wire whisk until it looks frothy, about 1 minute. You do not need to add the cream of tartar.

For whipped aquafaba, add the measured amount to a stand mixer fitted with the whisk attachment. Add the cream of tartar, and then turn the mixer on. Whip on high speed until your desired fluffiness. This takes some time so be patient. We usually stop mixing after 4 to 5 minutes. To tell when it is properly whipped, remove the whisk and turn it upside down, soft peaks will hold at first and then slowly melt back into themselves after a second. Firm peaks will hold and look more distinct, but the tips will still fold back on themselves. Be careful not to over whip as this can cause it to loose all of it’s airiness and deflate. 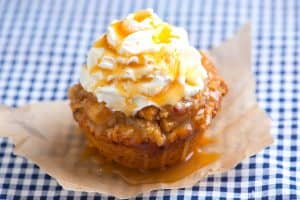 A fun and easy apple pie cupcake recipe made with cinnamon roll dough, spiced apples and a crumble topping. How can it go wrong? Jump to the Apple Pie Cupcakes Recipe… Read more 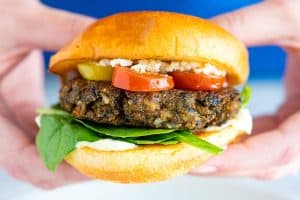 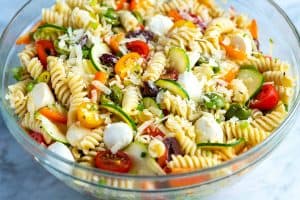 Fresh and easy pasta salad packed with crisp vegetables, fresh mozzarella, and tossed with a simple homemade dressing. The perfect side dish! Jump to the Easy Pasta Salad… Read more 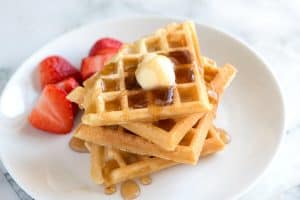 I love these light and crispy waffles. Our recipe is quick and simple to make and produces the best homemade waffles. Jump to the Waffles Recipe How To… Read more 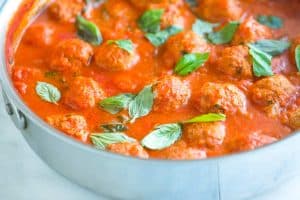 How to make tender ground turkey meatballs cooked in a quick and easy tomato basil sauce. You will love this easy recipe. There are no lengthy cooking times… Read more 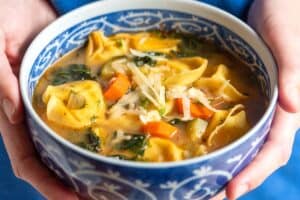