How to make baked French toast with cinnamon raisin bread. Jump to the Baked Cinnamon Raisin French Toast Recipe or read on to see our tips for making it. 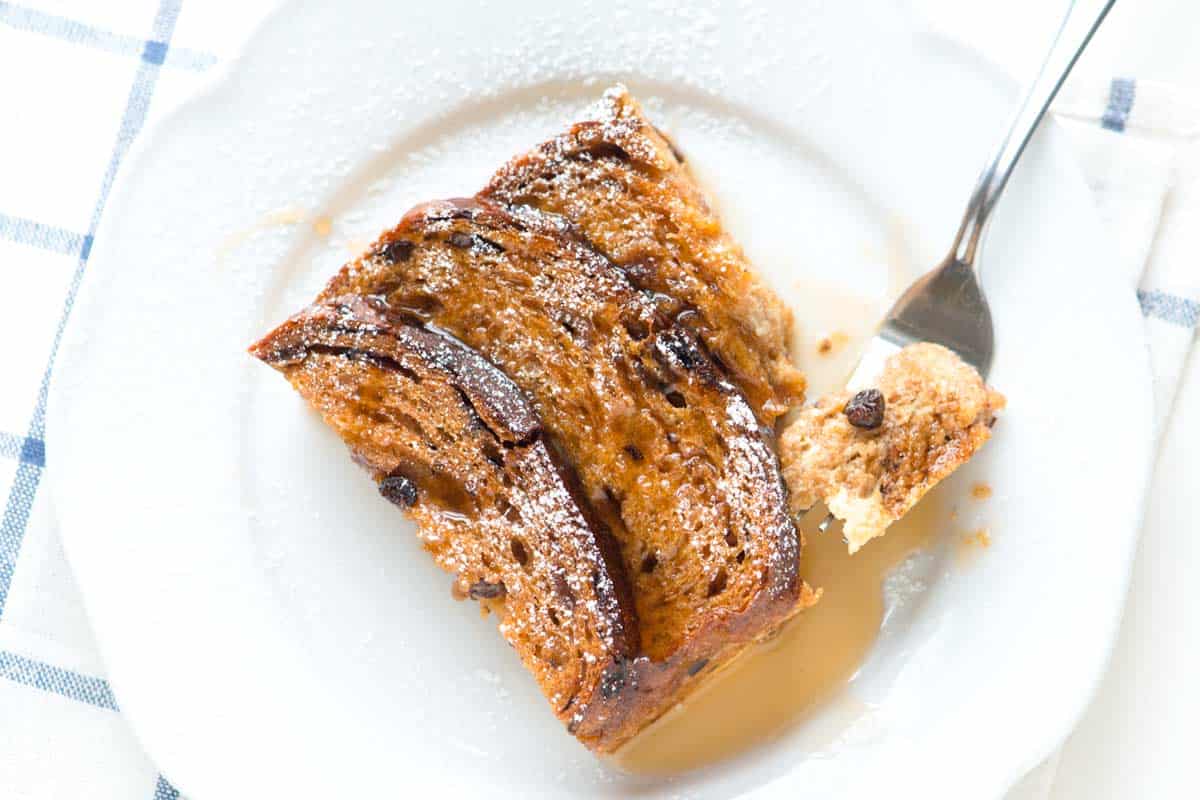 This recipe is inspired and adapted from one of our favorite food bloggers / cookbook writers, Smitten Kitchen. If you like the sound of this recipe, we highly recommend taking a look at her book, The Smitten Kitchen Cookbook.

YOU MAY ALSO LIKE: This easy French toast recipe is seriously good – you only need 30 minutes and a few simple ingredients to make it. Jump to the Easy French Toast Recipe.

How to Make French Toast in the Oven 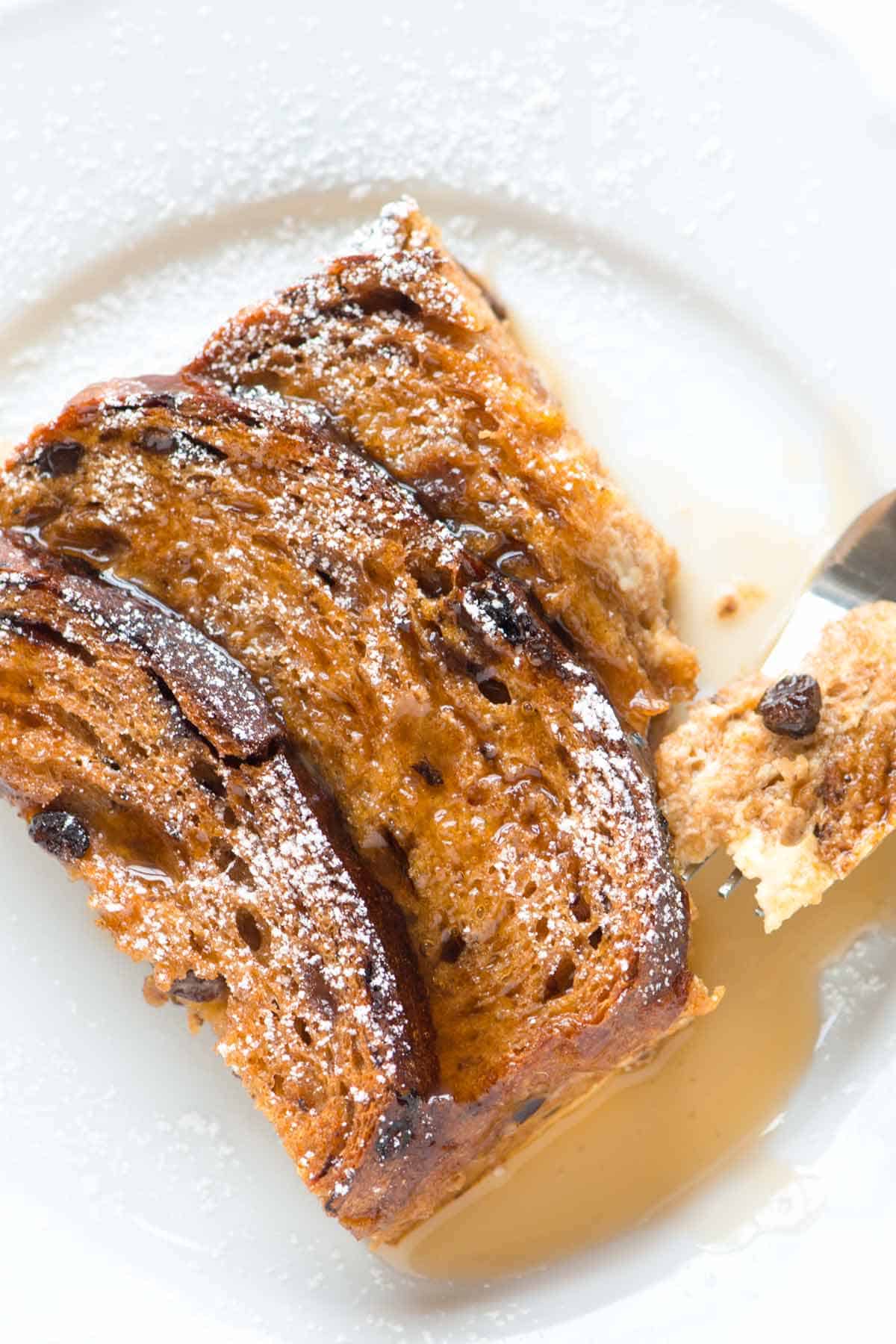 To make it, generously spread each bread slice with butter and sprinkle with a little cinnamon sugar. Then bake the buttered slices in the oven until toasted and the sugar has some crunch. After they cool off a bit, layer the bread in a baking sheet and pour over a mixture of milk, eggs and vanilla. 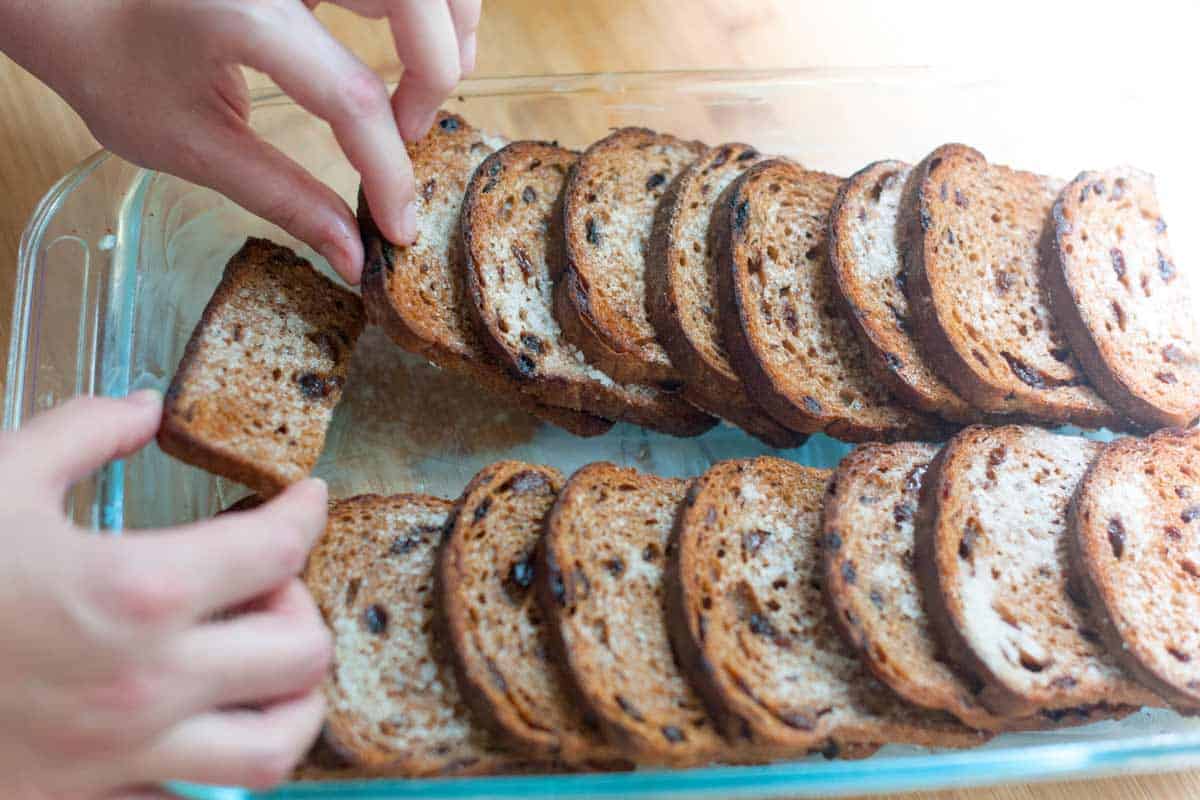 Set the baking dish aside for 15 minutes or so and give the top of the bread a push to help absorb some of the custard. 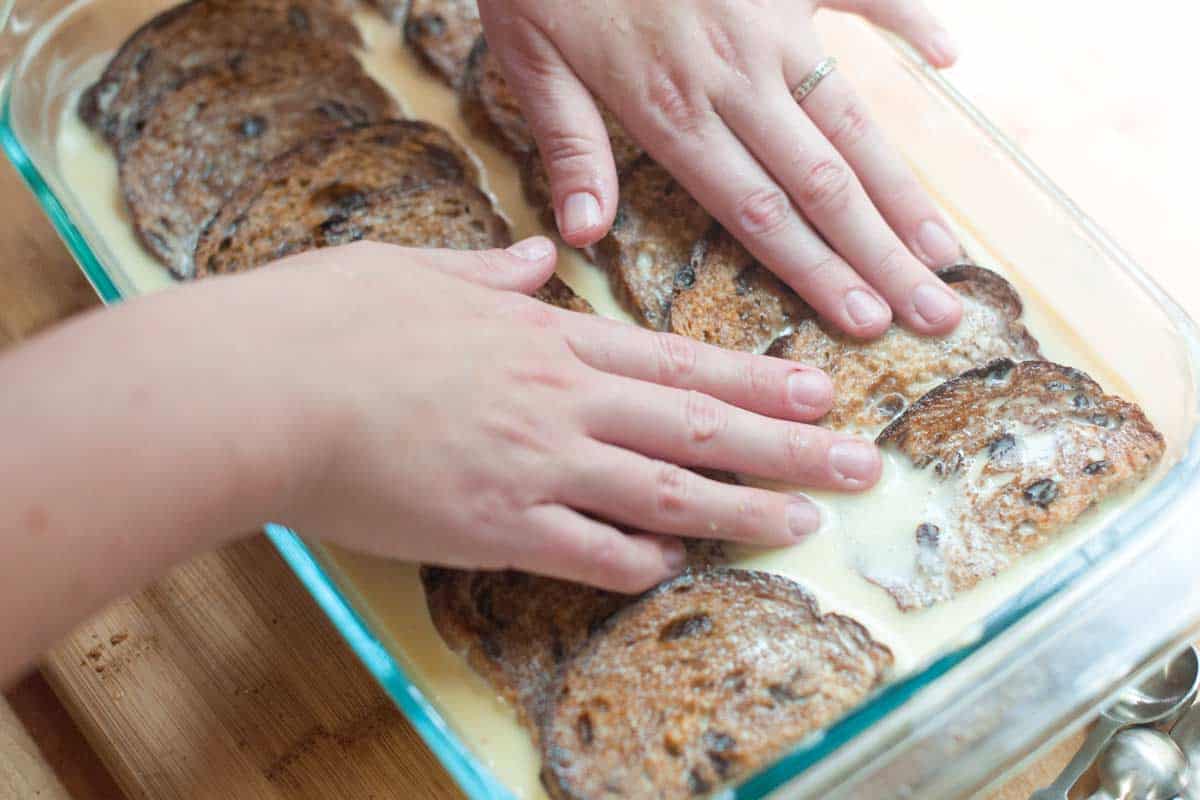 Make ahead: Instead of waiting 15 minutes, cover and refrigerate overnight.

After about 30 minutes in the oven the French toast will be puffed and golden. Slice into squares and serve with maple syrup and butter on top.

YOU MAY ALSO LIKE: Enjoy this baked oatmeal with fresh blackberries and caramel sauce for breakfast or even for dessert. Jump to the Blackberry Baked Oatmeal Recipe.

Recipe updated, originally posted August 2012. Since posting this in 2012, we have tweaked the recipe to be more clear. – Adam and Joanne

This takes our beloved French Toast up a couple notches. Instead of standing, patiently waiting for custard-soaked bread slices to cook in a pan, they are lined up in a baking dish, soaked in vanilla custard and baked until puffed and golden brown. We use cinnamon raisin bread for this, but basic sandwich bread will work nicely.

In a small bowl, whisk the sugar and cinnamon together. Place the bread in one layer onto the baking sheets. Spread each slice with a little butter and sprinkle with about a teaspoon of cinnamon-sugar — you might have some cinnamon-sugar leftover.

Slide the baking sheets into the oven and toast the bread until golden and until the cinnamon-sugar top has a slight crunch, 5 to 10 minutes.

Reduce the oven to 375 degrees F and let the toast cool slightly.

Butter a 9-inch-by-13-inch baking dish. Cut two slices of the toast in half horizontally. You will have two top-halves (with the curved crust) and two bottom-halves.

In a medium bowl, which the milk, eggs, salt and vanilla until blended then pout over the toast in the baking dish. Use a spatula or hands to gently press the toast down into the custard then let it sit for 15 minutes and up to overnight so that the custard absorbs into the toast.

Bake the French toast until puffed and no liquid seeps out of the bread when they are pressed, about 30 minutes. Cut into squares then serve with maple syrup and more butter. 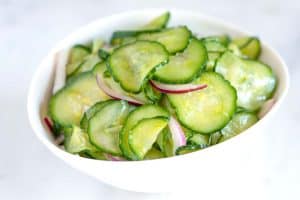 How to make the best cucumber salad! We toss thinly sliced cucumbers with a sweet, tangy dressing made of vinegar, a little sugar, and Dijon mustard. Jump to… Read more 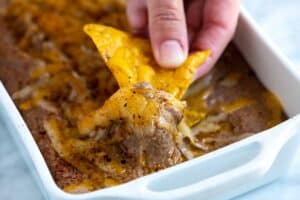 Think of this as a mash up of black bean dip and onion dip. Thanks to cooked sweet onions this easy bean dip is absolutely delicious and perfect… Read more 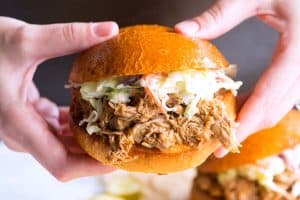 How to make the best slow cooker pulled pork that’s perfect for sandwiches, salads, and tacos. For a quicker version, we have also shared how to make this… Read more 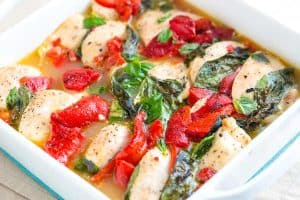 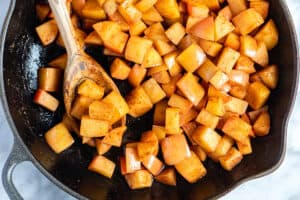 Extra easy cinnamon apples made on the stovetop in about 15 minutes! Enjoy these buttery cinnamon-laced apples over ice cream for dessert, spooned over pancakes and waffles for… Read more 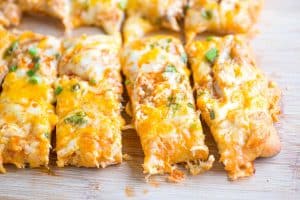 Thanks to store-bought (or homemade) pizza dough, you can make this easy buffalo chicken pizza with shredded chicken tossed in buffalo wing sauce and cheddar cheese. Jump to the… Read more